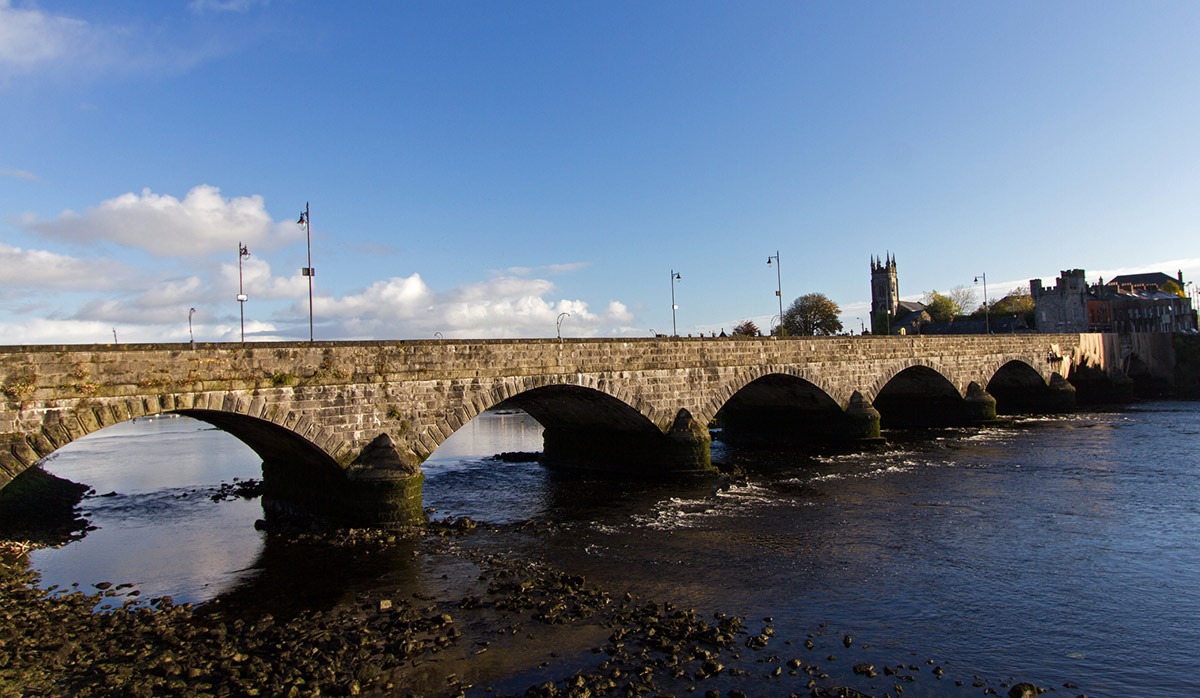 The Land Development Agency (LDA), Limerick City and County Council (LCCC), the HSE and CIÉ have today signed a Memorandum of Understanding for the creation and implementation of a master-plan for a brownfield mixed-use site in excess of 50 hectares at the Colbert Station area of Limerick City.

The Memorandum of Understanding outlines the key steps and actions of the signatories for the creation of a new urban neighbourhood in the heart of Limerick City and a comprehensive implementation and delivery strategy.

The site of c. 50 hectares consists of land owned by State bodies including LCCC, the HSE and CIÉ. The project will be transformative for Limerick City Centre and through cooperation of key stakeholders has the potential to deliver very significant living, office and leisure space adjacent to Limerick’s main transport hub and a HSE facility and accompanying lands.

The design review process, a precursor to a statutory master-plan, is the first step in the development at Colbert Station. The process will evaluate the potential for the site to deliver on desired outcomes and provide a high-level vision of what the development could comprise. The design review process is expected to begin in the coming weeks and will be led by the Royal Institute of the Architects of Ireland (RIAI), adhering to best practice international standards to ensure optimum master-planning of the site.

The signatories of the Memorandum of Understanding are delighted to announce that David Browne, former President of the RIAI and director at one of Ireland’s leading firm of architects (RKD), has been appointed chair of the design panel. David will be working with the LDA to establish the panel in the coming weeks.

Minister for Housing, Planning and Local Government, Eoghan Murphy TD, welcomed the advancement of the initial announcement made in October 2019 and reiterated the Government’s commitment to developing regional cities to grow their population in line with Project Ireland 2040:

“In this project we can see the value that the State’s new development arm, the LDA, can have in bringing both vision and affordability to the heart of plans for Limerick’s future. The design review and establishment of a panel of industry experts is a key step in the development of the site at Colbert Station in Limerick. The review will act as a launching pad for a future statutory master-planning process at the site and has the potential to deliver a significant number of homes in the heart of Limerick City.

A key part of the work of the LDA is the delivery of social and affordable housing and with the size and location of the site as well as the cooperation of local and national stakeholders the development has the potential to significantly deliver on LDA goals by utilising the area not just for homes but also community spaces. The development will be a significant step in Limerick growing in line with the population projections set down by Project Ireland 2040”

“The initiative at Colbert Station represents a significant step forward for us in delivering on our nationwide remit to help harness the growth potential of cities throughout Ireland.

I am thrilled to see such ambition coming from our own team, the other stakeholders and signatories to embark on a project of this scale. Its city centre location at Limerick’s main regional and intercity transport hub will show the value of and deliver a very desirable “transit oriented development”. That form of development will be the key for the future to fostering cohesion and sustainable living in this new local community. Healthy living without car dependency can now become a reality for thousands of new residents in Limerick.

I have worked in the past with David to examine the potential of Limerick to grow to 300,000 and can think of no one better suited to take on the challenge we have asked him to undertake today. I am delighted and want to thank him for agreeing to take on this project for us and for Limerick.”

“The area at Colbert Station provides the scale required to deliver transformative redevelopment projects which are at the core of the LDA’s mandate. The LDA is an agency with a national remit and the signing of this Memorandum of Understanding represents a significant step forward for the LDA’s footprint in cities outside Dublin.

The collaboration provided by stakeholders to date bodes well for the advancement of a sustainable, compact and affordable development for Limerick City centred around the existing rail and bus hub. We look forward to advancing the initiative and engaging with the public throughout the process.”

“CIÉ has a unique role to support not only sustainable transport but also sustainable development.  With hubs in cities and towns across Ireland, CIÉ lands can play a key role in the provision of housing, employment, public services and leisure space in close proximity to frequent, high-quality transport services – the very ethos of transport-orientated development. The partnership at Limerick’s Colbert Station with the LDA, LCCC and HSE exemplifies the approach we wish to take across our network.”

Mayor of the City and County of Limerick, Cllr Michael Sheahan, said:

“This is a very important first step in the development at Colbert Station. Limerick is one of the most affordable places to live in Ireland and the significant investment put forward by the LDA to fund the design review and master-planning process will ensure that it remains so.

The development represents a unique opportunity to re-develop lands for a more appropriate use by delivering living and work opportunities in the City Centre.”

Chief Executive of Limerick City and County Council, Dr Pat Daly, spoke about the potential scale of the development and its transformative influence on Limerick City. He said:

“The advancement of a 50 hectare site in Limerick City in conjunction with the LDA, HSE and CIÉ represents a hugely transformative development for the City Centre. Continuing our strong economic growth over the last number of years and building on existing work undertaken by Limerick Twenty Thirty will ensure that Limerick remains one of the most viable locations for living and working and reiterate Limerick’s position as the economic powerhouse of the Mid-West.

The plan could see the development of homes, leisure and office space in the centre of the city with direct transport links to other Irish cities within walking distance of the new development. Recruiting best in class international experts will, in conjunction with the capabilities of existing stakeholders, ensure that this project truly delivers a 21st century urban community.”

The Land Development Agency (LDA) was created in September 2018 with the purpose of opening up state owned land for development. The Government has committed to capitalising it with €1.25 billion following enactment of its grounding legislation. The LDA has a national focus and is currently active on nine sites that will deliver around 4,000 homes. The Land Development Agency in partnership with Dún Laoghaire-Rathdown County Council recently announced plans to deliver 598 new homes at Shanganagh in Shankill, Co. Dublin.  The development will consist of 307 cost-rental homes, which will offer long-term security of tenure to people who struggle to access homes at affordable levels, 200 social homes, 91 affordable purchase homes

Through its delivery vehicle, Limerick Twenty Thirty, LCCC recently completed works on Limerick’s newest high-grade office space development, the award-winning and LEED Gold standard Gardens International. Limerick Twenty Thirty has also submitted planning permission for the 1.62 hectare Opera Site, which will have the capacity to accommodate up to 3,000 workers. The total cost of that project is expected to be €180 million, with 94% of the cost secured through European Investment Bank and the Council of Europe Development Bank loans.

Limerick City is the main economic driver of the Mid-West of Ireland. According to the Limerick Economic Monitor, Limerick City and County has recently undergone five years of economic growth delivering more than 15,000 jobs, unemployment decreased by 14.2 percentage points over the past six years in conjunction with investment from new and existing companies in Limerick growing by 46.1%. Furthermore, Limerick City and County has a large catchment area with approximately 1.3 million inhabitants within a 90minute drive of the city. Under project Ireland 2040 and the National Planning Framework, the Government is targeting growth for Limerick of a minimum of 50% by 2040, growing by some 50,000 people to, at least, 141,000.

Colbert Station was opened in 1857 and has remained as Limerick’s main transport hub since, housing both Iarnród Éireann and Bus Éireann services.   Rail services at Colbert Station are used by approximately 1.1 million passengers annually, linking Limerick directly to Dublin, Galway and Nenagh/Ballybrophy, and connecting services at Limerick Junction to Cork, Kerry and Waterford. Colbert Station is a crucial part of Bus Éireann’s city and inter-urban services, which sees over 3.5 million journeys annually across the network within, to and from the city. Colbert Station plaza recently underwent a €3.5m transformation as the first phase of €17 million project, further phases provide for the upgrade of the Colbert station including new Bus Éireann facilities.

Transport Orientated Development – In urban planning, a Transport Oriented Development (TOD) is a type of urban development that maximises the amount of residential, business and leisure space within walking distance of public transport. In doing so, TOD aims to increase public transport ridership by reducing the use of private cars and by promoting sustainable urban growth.  It is also a form of urban development that is well aligned with Ireland’s international and national policy positions, and with recent institutional developments in relation to active land management by the State.

David Browne CV – David is a Director of RKD and former President of the Royal Institute of the Architects in Ireland (RIAI). David has undertaken significant work in Limerick in the past and is seen as one of Ireland’s preeminent design leaders promoting the value that architecture brings to society for the benefit of all. He is internationally recognised for his ability to unite and lead design teams, advancing a legacy of architectural excellence built over four generations. His core areas of expertise are 1) Construction Industry Leadership 2) Design Team Leadership 3) Masterplanning 4) Fast Track Programming and 5) Complex Project Realisation

Any cookies that may not be particularly necessary for the website to function and is used specifically to collect user personal data via analytics, ads, other embedded contents are termed as non-necessary cookies. It is mandatory to procure user consent prior to running these cookies on your website.